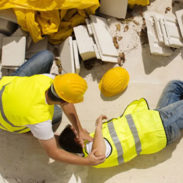 Barristers attack plan to award criminal defence work to lowest bidder and deprive defendants of right to choose solicitor. Barristers are campaigning against big cuts to legal aid. Depriving defendants of the choice of lawyer and introducing price-competitive tendering for legal aid contracts will undermine Britain’s international reputation for upholding justice, the organisation that represents

Legislation that will make it harder for employees to claim compensation for accidents in the workplace will take workers’ rights back to those of “Victorian times”, according to critics. Under the tough new rules injured workers would have to prove their employer was negligent and directly responsible for the accident before they are eligible for

Dads ‘to get a year paternity leave’

Under new Government plans, a year’s parental leave will be available to either the mother or the father after the birth of a baby, the Daily Telegraph has reported. The family-friendly laws, which are to be announced by David Cameron and Nick Clegg later this month, will not be introduced until October 2015, because of

Workers aged over 65 should pay NI

Tory MP Therese Coffey claims pensioners who continue to work should pay National Insurance, suggesting the extra revenue could be passed on as tax breaks to firms which employ young, low-paid workers. Currently, those in employment over the age of 65 do not pay National Insurance on their earnings. However, with more people expected to